The City of Sequim is honored by the generous donation of the spectacular 30 foot totem pole donated by the Jamestown S'Klallam Tribe. The pole was designed by master carver Dale Faulstich and was carved from a 900 year old cedar log by Dale and his team members, Bud Turner, Dusty Humphries, and Tyler Faulstich.

The totem pole is located on the Community Plaza in front of the Civic Center and tells the story of "Why the Sun Always Shines in Sequim." 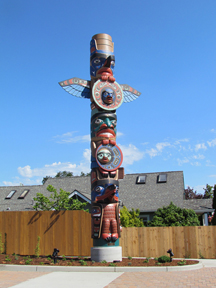 Why the Sun Always Shines in Sequim

Long ago, before the world came to be as it is today, the climate was always cold, dark and stormy. This was because the “Chief of the Land Above” had all the heat and light of the world trapped in the fire pit in his house. He lived in the sky, far to the east, in a large house made entirely of stone.

At this time, there was a small village located on the shore of a beautiful, calm bay. The village was called Scqwe’yen (today we pronounce it “Skwim”). In this village lived a man, his dutiful wife, and their two young sons named Kweye’cen and Sck’ayec. The people of this village were growing weak from hunger. Constant storms rocked the ocean, so the men were unable to go out to fish. Wind, snow and hail beat down and froze all of the plants, roots and berries until there was no food left. The man prayed to the “Chief Above” asking him to take pity on the people. He then got in his canoe and paddled out into the bay, hoping to catch some fish to feed to his starving family and friends.

The Chief Above answered the young man’s prayers by sending “Northwind” to capsize his canoe. The man drowned, leaving behind his widow and two sons. Through many hardships and privations, the widowed wife raised her two sons to be hard working, considerate and responsible young men. They became excellent hunters and fishermen. She also taught them the secrets of using the medicinal plants that grew in the forest. They became well known as “healers”. With their hard work, skill and generosity, the brothers helped the entire village to survive and prosper.

As they approached manhood, the brothers felt duty-bound to avenge their father’s cruel death. So one day, they took their bows, and gathered up all their arrows. The oldest brother, Kweye’cen, was the strongest, so he went first. He shot an arrow straight up in the air. The arrow went so high that it stuck in the sky. Then he shot a second arrow. This one stuck in the end of the first arrow. Then he shot a third arrow which stuck into the second arrow, and so on, until all his arrows had been shot. Then the younger brother, Sck’ayec, took his turn, and shot all of his arrows, continuing to stick one into the previous one until a long rope was formed that reached all the way from the “Sky World” down to the earth. Now the brothers climbed this rope, up through the clouds and entered the “Land Above”. Once safely up the rope the brothers started walking toward the east in search of the dwelling place of the Chief Above.

After walking for a long time, they saw campfire smoke coming from the direction in which they were headed. Soon they came upon two young women sitting by the fire, roasting camas bulbs. This was Skwesqq (Robin) and Kwiskws (Blue Jay). As the brothers approached, one girl turned to the other and said, “Do you hear someone approaching?” The other girl replied, “Yes. Hello, is anyone there? Would you like to share our freshly roasted camas bulbs?” The brothers realized the girls were blind. After sharing their meal, Sck’ayec went into the nearby forest and gathered the proper medicinal plants, which he applied to the girls’ eyes, restoring their vision.

Robin asked the brothers where they had come from and what were they doing so far from their home. Elder Brother answered, “We are seeking the “Highest Man” to avenge the cruel death he inflicted on our father.” Blue Jay exclaimed, “The one you seek is our father. You must be careful, as he is a cruel and malicious person.” Robin continued, “He treats us, his daughters, as if we were slaves. He made us blind by forcing us to look into the bright light he keeps in his house. My breast is burnt red from him making me work too close to his fire pit, and Blue Jay’s head and hair are all charred black (this is why, to this day Robins have a red breast, and Blue Jays have a black head). The sisters looked at one another for confirmation, then Kwiskws said, “Because you have restored our vision, we will help you with your quest.”

The four companions traveled east until they came to a large stone house. The building glowed red from all the heat contained therein. Robin and Blue Jay warned the brothers to be careful when entering the house. The door was a large stone slab that slams shut. “When the door opens you must quickly jump in, or else you’ll be crushed.”

The sisters entered the house carrying two buckets of cold water, while the brothers hid outside. Acting as though they were still blind, Robin pretended to trip, falling into Blue Jay, causing both buckets of water to spill into the fire pit. The house filled with thick clouds of steam. The brothers timed their entrance carefully so as not to be crushed by the stone door. Hidden by the clouds of steam, they rushed into the house and killed their enemy before he even knew he was under attack.

To this day, the brothers continue to walk across the sky each day and each night, keeping a watchful eye on the people in the village of Scqwe?yen (Sequim).

[Adapted by Dale Faulstich from a story told by Mrs. Robbie Davis in Klallam Folk Tales by Erna Gunther]