Create an Account - Increase your productivity, customize your experience, and engage in information you care about.

But It HARDLY RAINS here!

...And that’s exactly why we must plan for and manage stormwater! Rainwater is a critical source of streamflow and groundwater recharge in Sequim. Stormwater stewardship means cleaning our streets and storm drains to protect our water quality and quantity through good housekeeping practices.

The City’s first "Storm & Surface Water Master Plan" was adopted in 2016 and integrates these concepts while addressing changes in the climate and regulatory environment. (Click the title to download all or parts of the Plan.)

With the help of grant funding,* planners and engineers from Herrera Environmental evaluated the City’s facilities and operations while addressing problem areas identified in the "Stormwater Management Needs Assessment" (see below). The Plan also provides strategies for how to pay for the work needed. Currently, all stormwater work is funded by the City’s Sewer and Water Utility Funds.

Also, because individuals make choices in their homes and workplaces which either prevent or cause water pollution, education and outreach is always a component of stormwater management work.

All sources of water are vital to our future...  including stormwater!

The City of Sequim is fortunate to have relatively few flooding problems, but they do exist. In 2013-14, Sequim Public Works identified so-called "problem areas" and documented physical and operational stormwater management concerns in a report, "City of Sequim Stormwater Management Needs Assessment." (Figures are a separate 6 MB file.)

The study pro-actively addressed the City’s responsibility to maintain streets and stormwater infrastructure and efficiently manage water resources as the urban area grows. Identified needs were prioritized in the 2016 Storm & Surface Water Master Plan described above.

Another project sponsored by the City in 2009 explored how "Low Impact Development" stormwater requirements might look if the City chose to fully utilize those options. "L.I.D.," also known as "green infrastructure" (as compared to gray pipelines), focuses on infiltration and is very effective where soils can handle it like they can in much of Sequim. See the results of that study (PDF). 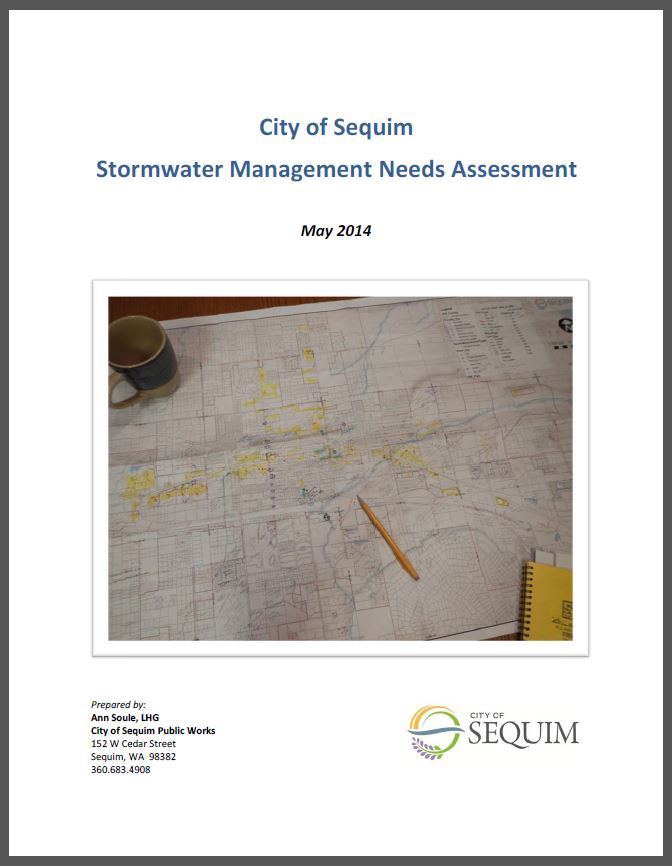